The problem of cooking large pieces of food in a pan is that heat is not transferred equally to every part. Everyone has had that strip of meat that is just the perfect medium-rare on the inside, but scorched black on the outside. Or the fish filet that has the perfect crust, but is still frozen solid when you cut it open. Sous-vide, French for ‘under vacuum’, is a method that tries to solve this problem. Using sous-vide your food is sealed in a vacuum bag and submerged in water. The water is set to a specific temperature and the food is kept there until it reaches that same temperature. Using this method your food reaches its perfect level of doneness without any burnt parts, while the vacuum bag keeps any of the taste from being lost to the water. According to some top chefs you’ll get the perfect steak if you leave it in a sous-vide machine for 2 hours at an ideal 55 degrees Centigrade. I’d tried something like that before: Timothy Ferris’ book 4 Hour Chef has a sous-vide recipe, where you spend one and a half hour next to a stove with a thermometer in a pan of water. The water contains a freezerbag filled with chicken that needs to be kept to 63 degrees Centigrade. If the temperature drops below 63, turn up the stove. If it rises above 63, turn it down. A great idea, until you spend the next one and a half hour being extremely OCD afflicted. Wasn’t planning on doing that again. Instead of staring at a stove you can pick a pre-built sous-vide machine, like the much praised Anova One. It doesn’t get simpler than this all-in-one device: fill a pan with water, put the Anova in, set the temperature – done! The Anova regulates everything without you ever having to touch it again. That ease just comes at a cost of about 200 dollars… And that’s when I saw this article in the Volkskrant. Creating your own sous-vide machine by combining a PID (Proportional-Integral-Derivative) controller with a heatsource like a watercooker. The PID, an industrial thermostat, learns how turning the cooker on and off influences the temperature over time. For example, when you normally turn a cooker off the heating element will remain warm and keep heating the water for a while. The PID can learn from this overshoot behaviour and compensate for it in the future, turning the cooker off early so the remaining heat brings the water up to the desired temperature instead. By compensating constantly the PID can keep the temperature within a very precise band. And any heatsource can be used instead of a watercooker – rice cookers and deep fryers are popular too – as long as the PID learns to compensate for the specific behaviours of your setup. The PID the Volkskrant uses is the Chinese Rex-C100, available at Amazon for 30 euro according to the newspaper. For that money you don’t just get the PID, it includes a thermocouple (the thermometer) and a solid state relay (the switch that turns your heatsource on and off) that are also necessary for the project. That might sound cheap, but it’s actually twice as much as they would’ve paid if they had just bought it directly from China: Banggood sells the same kit for 14 euro. So of course I had to try it out.

‘Try’ being the operative word, as it turned out to be a bit harder than I expected. What should’ve been a 1 hour project stretched to a few days I spent reading the indiscernible Chinese manual, trawling through conflicting online guides and scouring for a few missing parts. Suffice to say it was worth it, because my efforts resulted in this majestic creation: 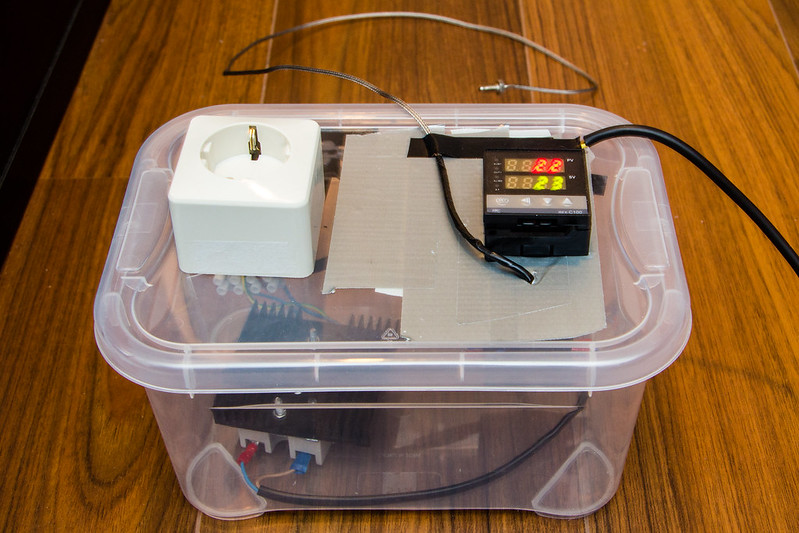 Uh, yeah, so that’s a bit of an anticlimax. But believe me, it works better than it looks. The ugly plastic storage box still keeps the parts dry, which is kinda nice considering there’s 230 volts running through them, and because I used a standard outlet I can plug in any heatsource I want. Sure, I could have used an actual project box, I could have used a nice built-in power connector, but really – what would’ve been the fun of that? 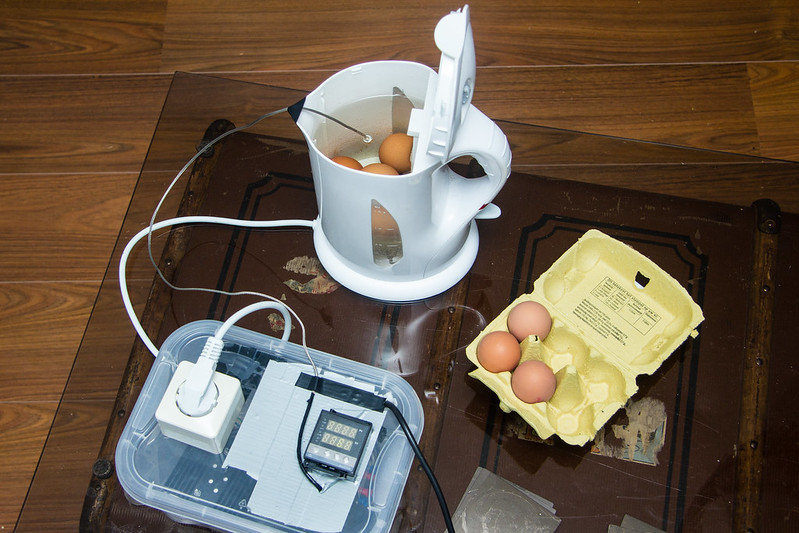 Not just because that’s what the original Volkskrant article was about, but also because it’s a standard test for any DIY sous-vide machine. By setting it to the perfect temperature you can make eggs where the yolk has this custard structure – not hardboiled, not soft, something in between that’s not attainable in any other way. But it’s a very precise temperature, much more precise than in any other sous-vide recipe. If your sous-vide machine deviates from the set temperature too much you’ll get a regular hard or soft egg, which would be kind of shit for all the effort you put in. Serious Eats has a lengthy article that I would recommend to everyone.

I set the PID for 64 degrees Centigrade, because according to this video from a sous-vide machine brand that’s the perfect temperature to create custard eggs. After a brief heating period the cooker was at the desired temperature – but was the PID right? For an extra quick check I used my cooking thermometer. 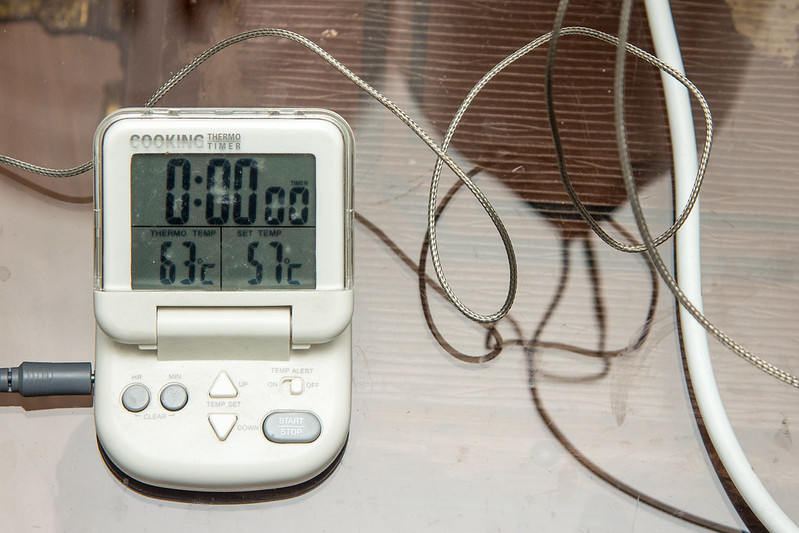 But that can wait. After the recommended 55 minutes I took out my egg, peeled it and cut it in half… 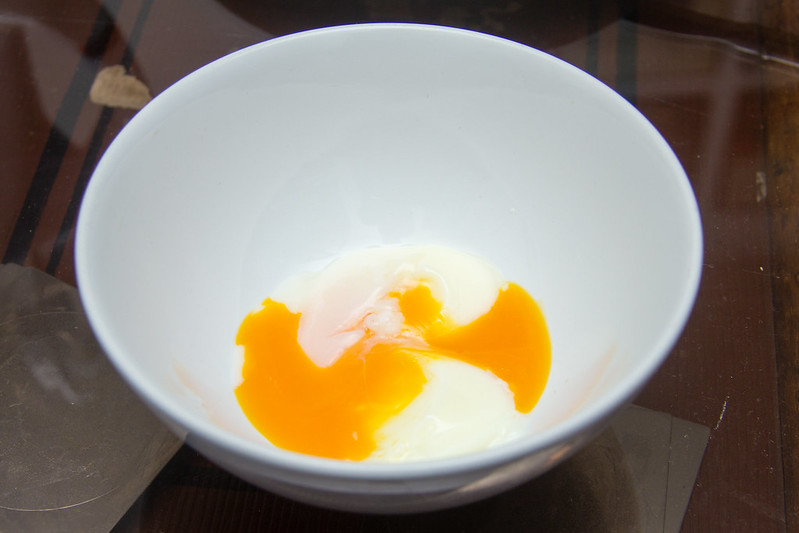 Okay, that was not what I expected. According to the online guides this should be safe to eat, even though it looks like liquid salmonella. After the first few cautious bites it turned out to be quite tasty, like an extremely soft egg. But not the custard egg I was promised.

Serious Eats says time is also a factor. Maybe 55 minutes in my DIY setup wasn’t long enough? To test that I kept the next egg in the cooker for 2 and a half hours. So after more waiting, peeling and cutting I got… 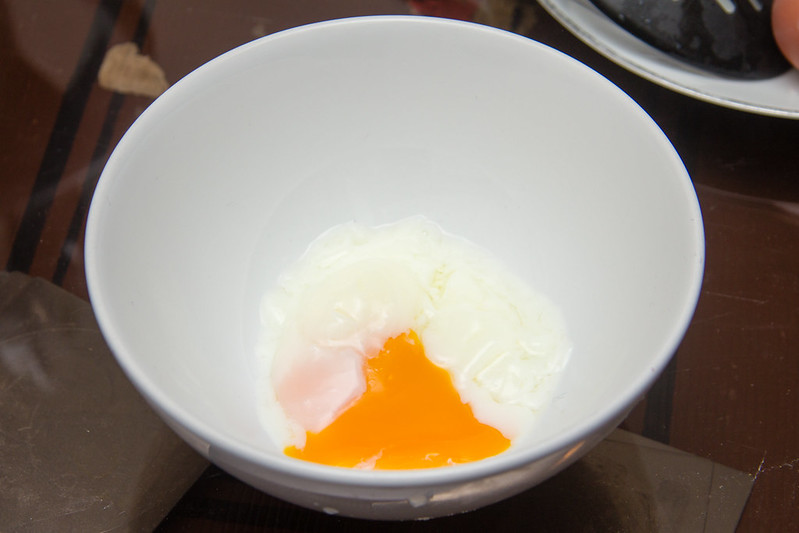 Better I guess, but still very liquid. Tasted good and the yolk was creamier, it could even be spread on toast like suggested in the video. But this still looks too much like liquid salmonella for my tastes.

I did one last attempt with an egg, but now at 66 degrees instead of 64. In the Serious Eats article that was the temperature at which the picture of their test eggs looked most like the description of a custard egg. 55 minutes later I cracked it open and… 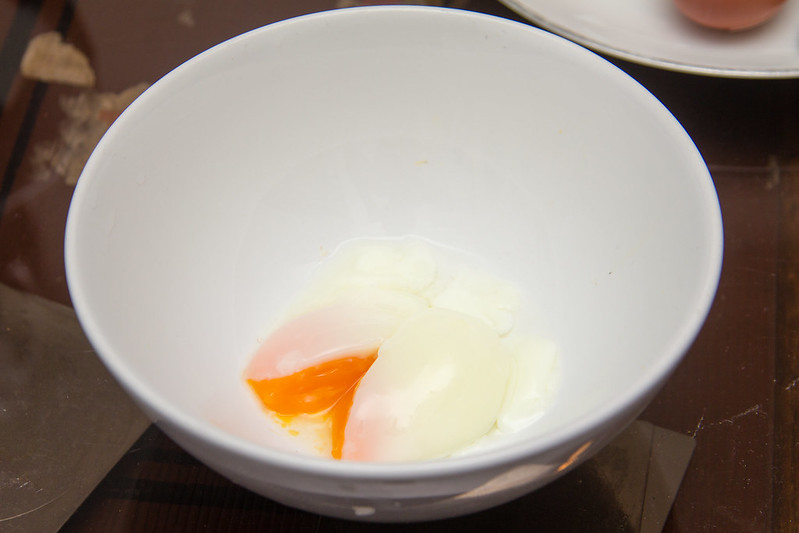 Wow. It’s just 2 degrees of difference, but suddenly the yolk has this custard-like appearance and the white actually retains an egg-shape after cutting. This is kinda cool. 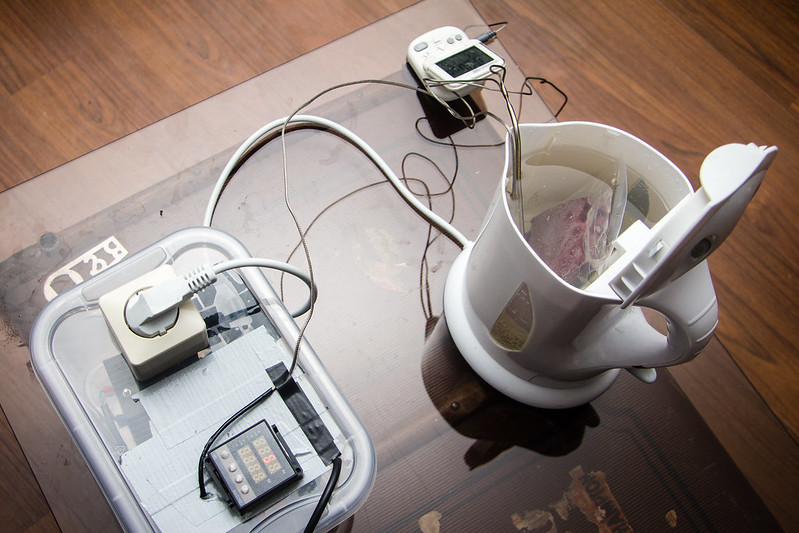 But a test with eggs is not a true test. Meat is the only true test! A nice piece of steak, to be exact. Serious Eats has another lengthy article you should read. According to them 45 minutes at 55 degrees should be sufficient to get the perfect medium-rare piece of cow on your plate. But because I’m becoming a bit wary of my PID, it might be reading higher temperatures than I’m actually getting, I decide to make it 1 hour at 57 degrees just in case. 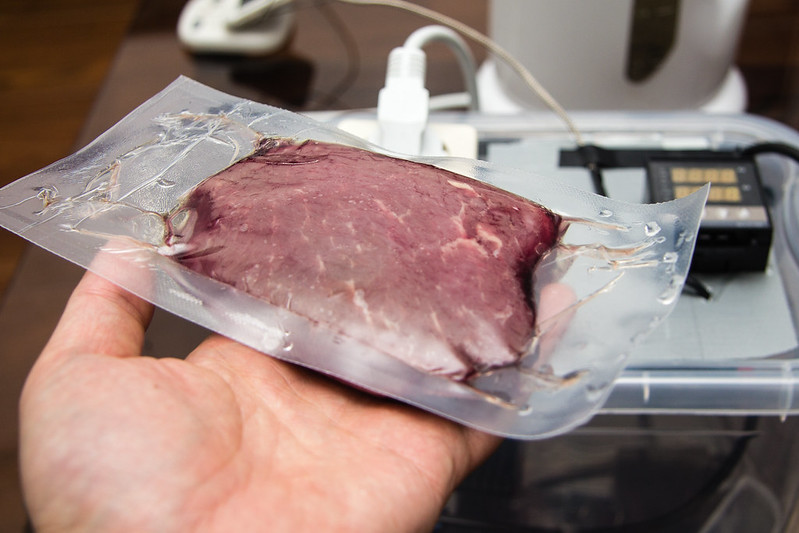 I had a piece of steak still lying in the freezer, and the plastic it was already vacuumsealed in was fine to use for sous-vide. This did mean that I couldn’t add salt and pepper or other spices to the steak, but it’d be fine for a first test. After defrosting in the fridge the steak went into the cooker and an hour later… 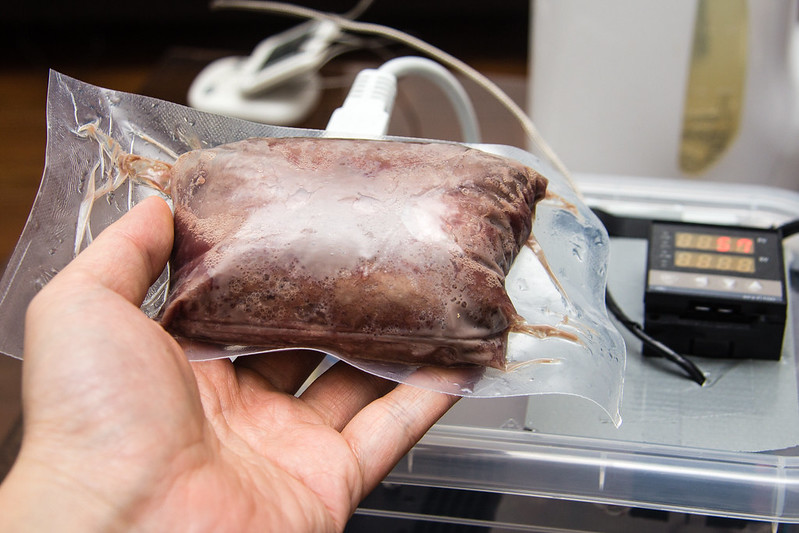 Okay, that doesn’t look very tempting, but hey, it’s a work in progress. Maybe it’s better if we take it out of the bag. 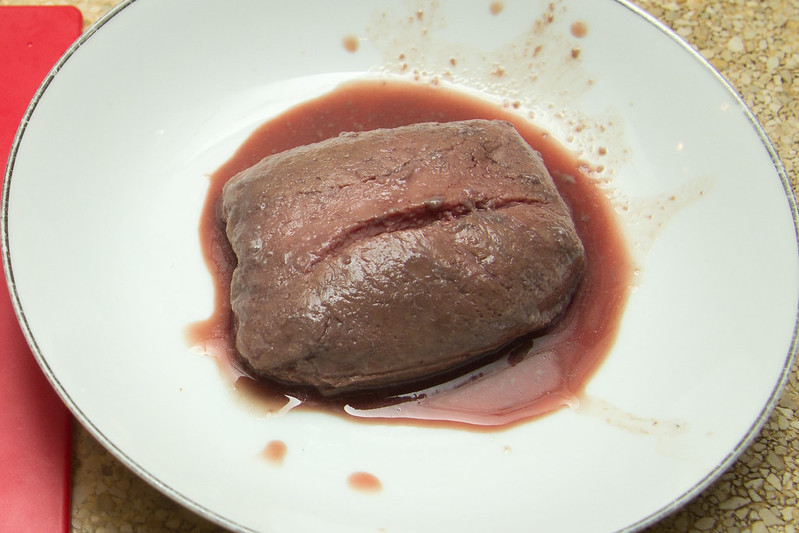 No. That’s definitely not better. 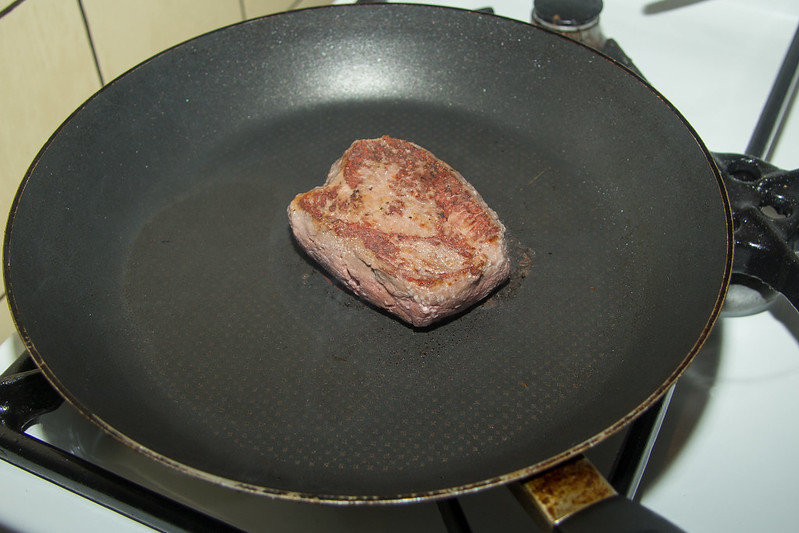 Luckily I’d read beforehand that you need to finish any sous-vide meat in the pan, so I knew what I was getting into. 1 minute at your highest scorching heat on both sides will give you enough maillard reaction to get you that nice traditional brown steak crust. After that I sliced it open to take a look… 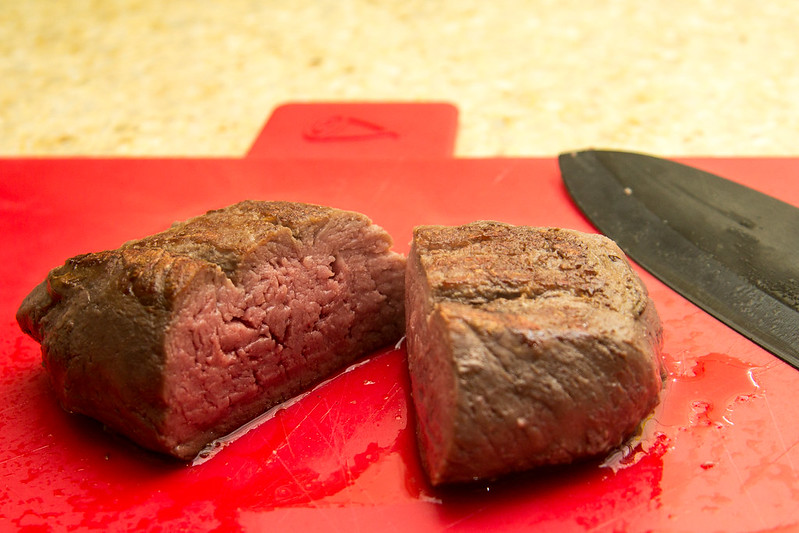 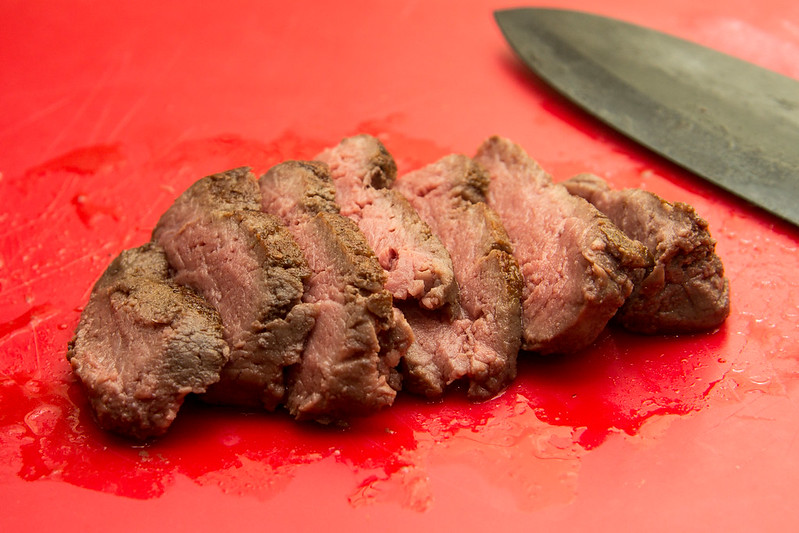 So tender. So tasty. So unexpectedly good for a first test. So worth getting redflagged as a bombmaker on the internet over.

This article was originally published on Style.over Substance. Now I bet you want to make your own sous-vide machine after seeing these ... A master chef with impeccable knife skills is presented with a series of knives ... One thing I’ve learned from sous vide cooking: I have no clue where any ...